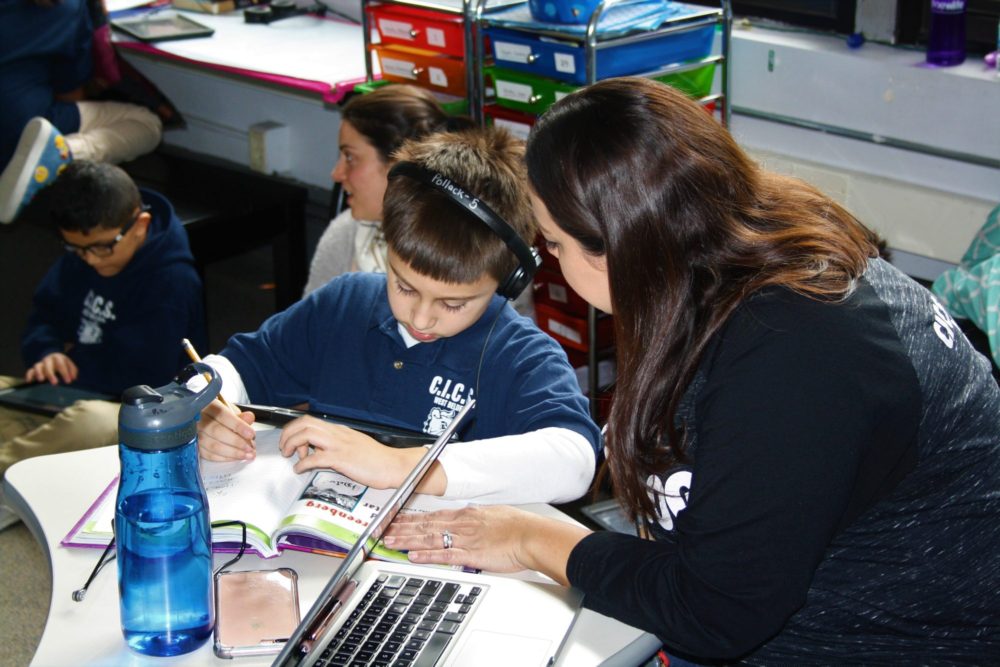 CHICAGO — At the end of the first-floor hallway in the West Belden campus of the Chicago International Charter School network, across two connected rooms that used to be a library, almost 60 children spread out on pillows, bouncy chairs, rocking chairs, and benches. In the morning’s reading lesson, most of them worked on their own iPads, moving through Lexia Reading modules or researching famous figures on sites like YouTube. One of the two classroom teachers worked with a small group, going over the biography of Martin Luther King Jr., asking questions about where students had found certain facts and how they knew they could trust them. The other classroom teacher spoke one-on-one with students, simultaneously monitoring the large group of independent workers.

The classroom is unique in CICS West Belden in its mix of third- and fourth-graders, who spend every day together. Their teachers technically specialize in one grade – Christina Hanna in fourth grade and Kelly Pollack in third – but they consider all the students theirs, and flexible groupings mean students can get support above or below their actual grade level as necessary. Parents can ask questions of either teacher, and students have bought into the idea that this multiage classroom is one community.

Nontraditional classroom arrangements like this are one way that CICS West Belden, managed by Distinctive Schools, does personalized learning.

“We’ll look at data to see if we have the successes and celebrations that we’re hoping to see based on our structure this year,” before planning grade levels for the next year.

Personalized learning, an amorphous term that means different things to different people, generally refers to a more customized learning experience for students, based on their strengths, weaknesses and interests. Students are given the space to move through content more flexibly, at their own pace, often aided by technology — like the Lexia Reading software the West Belden students used on their iPads.

Nontraditional grade groupings are another way to address students’ individual learning needs. West Belden experimented with a first-through-third grade multiage classroom (which it no longer has), and its middle school is split this year into one departmental team for fifth and sixth graders and another for seventh and eighth graders. Throughout the day, these students see four different teachers on their respective teams.

The school structure changes almost every year, prompted by the desires of teachers and the recognized needs of students. In discussing plans for this year, Colleen Collins, the school director, said she had asked teachers to brainstorm how they could offer the best experience to the incoming fifth and sixth graders. The plan emerged from there.

“We’ll look at data to see if we have the successes and celebrations that we’re hoping to see based on our structure this year,” Collins said. The school looks at student growth data from standardized tests and considers what teachers believe will work best for a specific group of students.

In Hanna’s and Pollack’s case, they pitched the multiage classroom after having worked with those students in separate classrooms the year before. For two hours each day, they had combined their second- and third-grade classes, and noticed their students absorbing much more information than they did when the grade levels were separate.

This year, they change the student groupings frequently as they monitor test scores and conduct formal and informal observations. Sometimes the data say a student should be in one group, but Hanna or Pollack notice the child isn’t thriving, so they switch things up.

“We want them to be confident and comfortable,” Pollack said. “And then push them to the next level from there.”

Besides offering more tailored learning experiences for students, the flexible, ever-changing structure in West Belden gives teachers a sense of choice and empowerment. Pollack and Hanna said teacher morale is high and there is a strong conviction in the power of the personalized learning model.

“We have support, we’re collaborating,” Pollack said. “A lot of that has to do with the belief that this is what it’s going to take. We’re all committed.” Tara García Mathewson is a staff writer. She launched her journalism career with two award-winning pieces co-produced during a three-month stint at the Kitsap Sun in Bremerton, WA. After graduating with honors from the Medill School of Journalism at Northwestern University, she joined the staff of the Daily Herald, Illinois’ third largest newspaper, where she covered city government and education in Chicago’s suburbs. There she was on a team that earned a Chicago Headline Club Lisagor Award for a series tied to the 40th anniversary of Title IX. García Mathewson left the daily grind of newspapers to spread her wings as an independent journalist, covering national education issues, immigration policy, Chicago’s Latino business community and more. She received the Marguerite Casey Foundation’s Equal Voice Journalism Fellowship in 2014 and the Education Writers Association Reporting Fellowship in 2017.